Are You A Normal Sexual Male?

I’m going to go out on a limb here and just say that I don’t think I’m the only one who has ever wondered that. Specifically, wondered that about my sexuality. 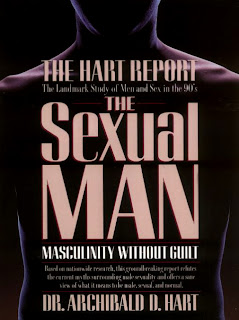 I recently read an excellent book on male sexuality called The Sexual Male by Dr. Archibald Hart. The book itself was based on some well-known sexual studies, as well as a personal study and clinical observations by Dr. Hart himself. What was different about this book was exactly who Dr. Hart was examining:

By design, I have used a select sample of men. It does not in any way represent the general male population. It samples males who, by and large, consider themselves to be religious and of high moral standards.

What was intriguing to me about this is that who he was analyzing could be considered the “typical” American male: upstanding citizen, faithful to his wife and kids, believes in God. Dr. Hart’s point was not to push a “Christian agenda” but to say, “Look, this is the ‘normal guy,’ and this is how he deals with his sexuality.” Dr. Hart said that he wasn’t interested in examining the extremes, he simply wanted to know how the average American male fit into all of this.

THE CONFUSED SEXUAL MALE
“Despite the sexual revolution, or perhaps because of it, men today are becoming more and more confused about this most primal aspect of their being,” he says. And I think most of can see this in others without trying. I think we might even be able to see it in ourselves if we spend five seconds and think about it.

Hart looks at all aspects of male sexuality, from early childhood to the married man. He talks about how many of us were failed with either no sex talk at all from our parents, or we got the sex talk but were robbed by only getting the facts. “Watching animals and hearing the facts of sex provide information, but they don’t help a boy, and later a man, understand the sexual storm that rages within.” I was particularly drawn to this idea. One concept he discusses was how when little boys ask about sex, they aren’t simply asking about the facts, they’re asking about how those facts affect their own lives. They’re asking how they fit into this whole sexuality thing. And, Hart says, many of our fathers failed us in this because they themselves still don’t understand it.

He says our oversexed culture has “neuroticized ‘sexuality.’ We have turned good, otherwise healthy males into compulsive masturbators and obsessional addicts.” As a culture we have lost control and we are forcing sexuality on children who don’t yet know at all how to handle the feelings and the desires. “Every male transitioning from childhood through adolescence to adulthood has to develop a system of self-control over his sexuality. It is alarming how few parents understand this. Many believe it just happens–leave it alone and it will take care of itself. True? Not at all.”

THE DANGER THIS POSES TO MARRIAGE
But Dr. Hart doesn’t simply look at sexuality’s impact on young boys. He spends most of the book talking about the relationship the average American male has with his own sexuality (the mean age of his study was 41).

“Sex, after all, is the most intimate form of human communication we know between the sexes, but it has its own language and expression. Unfortunately, men and women often speak different sexual languages, and this can spell trouble for a marriage.”

This is so true. I can’t tell you how often I receive emails from troubled wives expressing confusion, anger, and deep sadness over their husband’s confusing and often hurtful sexuality. These husbands have not yet learned how to communicate sexually. They have not yet learned how “sexuality can shape our fathering ability and enable us to nurture, build intimacy, and maintain our successful marriages. The man who just accepts his base sexuality for what it is and has no desire to purify any contamination within himself is robbing himself of an opportunity to really grow up. He will struggle through life carrying unnecessary baggage. He will be an incomplete man.” Disagree with him if you want, but I see this all the time.

LET’S TALK ABOUT THIS
Amidst all the research that Hart shares, his overarching theme seems to be communication. He states time and time again how important it is to not be an island when it comes to this sensitive topic. He tells men and women how important it is to have safe place for men to open about their sexuality. In fact, he says that many problems are directly related to secrecy which clouds male sexuality: “Sex is an excessively secret thing, involving too much intrigue and mystery. When anything is secretive, it has the potential to become distorted and even neurotic. It is in the soil of concealment that seeds of sexual addiction, anxiety, depression, compulsions, phobias, and disassociations are planted.”

Though I read about this stuff quite frequently, write about here on iamhusband.com, and communicate with others about their own sexuality often, I was even challenged to examine my own past and come to terms with why I am the way I am in a few of these areas. It was eye opening for me to see how I fit into this “average male” lineup, and to ask myself why that was, and to ask myself if I saw areas in my life that I needed to change.

I’d also highly recommend this book to wives who want to better understand their husbands’ sexuality. Especially if you struggle with being completely turned off by your husband’s sex drive, this book my help you “humanize” him and sympathize with the struggles men have in the area of sex. Ideally, it’d be awesome if you and your husband read this book together. That way you can both discuss what you’re learning, and your husband can share with you exactly how he relates to what’s being shared in the book.

I’d like to share the table of contents with you below, just to give you more of an idea of what’s covered in the book. But again, this is a good one. I think you’ll like it.


TABLE OF CONTENTS
Male Sexuality - The Untold Story
Am I Normal?
Why Male Sexuality Goes Wrong
How Men Think About Sex
What Men Really Want from Sex
Why Men Love/Hate Pornography
Teenage Sexuality
Sex and the Married Man
Men, Sex, and the Workplace
Religion and Sex
Creating a Healthy Sexuality

Be A Better Husband