About Putting Her Laundry Away 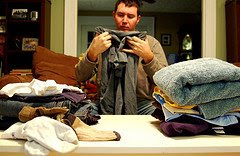 The other day I was putting away some folded laundry on the bed that my wife didn't have time to put away. Without thinking, I put my own stuff away and left hers laying where it was. After thinking about what I had done, I realized that I have somehow picked up the lame excuse of "Well I don't know where all her stuff goes."


I stopped, thought a second, and then decided I could at least try and figure out where these few articles of clothing belong. Besides, even if I didn't know were all the stuff goes, I certainly could help out with some of it. (I think part of my hesitation comes from having a mommy. I mean, she could touch my cartoon-print briefs and put them away, but I was never asked or expected to do the same for her. Mom's underwear drawers were off-limits and confusing.)

After checking a few drawers, I realized that, yes, I could put the clothes away in their place with confidence, and that my reasoning of not knowing where things go was just an excuse not to take an extra thirty seconds and give my wife a little help. And so, I have once again seen an area in which I haven't been giving 100%.

This marriage thing takes constant work, but it sure is worth it, isn't it?

Be A Better Husband